I chose a couple of candidates for Fantasy Man Monday that you might find unusual. I just saw “Brokeback Mountain” Yeah, I know I’m way behind times.  I remember the huppla and mixed feelings about the movie.  It was based on a short story by Annie Proulx.  (SPOILERS). These too men are Fantasy Man Monday Hottie worthy. What bigger fantasy than hidden love?

I love the story.  It was moving, thought provoking, tender.  Enormous sexual tension played out on the screen from the first scene of their meeting.

It was so much a story of the loss of a road not taken. It is a story that will have impact on my life. 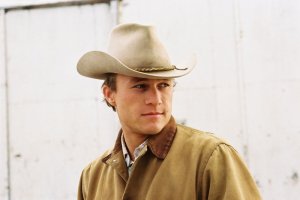 The New York Times review of the film, critic Stephen Holden writes: “Both Mr. Ledger and Mr. Gyllenhaal make this anguished love story physically palpable. Mr. Ledger magically and mysteriously disappears beneath the skin of his lean, sinewy character. It is a great screen performance, as good as the best of Marlon Brando and Sean Penn.”[26] In a review in Rolling Stone, Peter Travers states: “Ledger’s magnificent performance is an acting miracle. He seems to tear it from his insides. Ledger doesn’t just know how Ennis moves, speaks and listens; he knows how he breathes. To see him inhale the scent of a shirt hanging in Jack’s closet is to take measure of the pain of love lost.”[2 (from Wikkepedia)

I like the way the reviewer said, “anguished love story physically palatable”.  That is exactly the way I felt it. His loss was a visceral thing.  Heath Ledger was amazing as Ennis.  He as a person, completely disapeared into the character. Like the reviewer said, “tears it from his insides.”

Both actors were wonderful in the roles they were given. A hidden love affair spanning decades. That to fill the void left by only occasional visits with Ennis, Jack had an affair with the local Ranch Foreman, not the foreman’s wife as he told Ennis. That he was beat to death for being “gay” not an accidental tire blow out as his wife told Ennis.  All veiled subtext slid into the story line in a masterful way.

So powerful that the happiest time in Jack’s life was one short summer on Brokeback Mountain. Who, even in death was denied his request for his ashes to be scattered on the mountain. How symbolic that he didn’t get what he wanted in life or death. His ashes would be buried in the family plot.

So much conveyed in Jack’s mothers eyes as she looked at Ennis allowing him to place the shirt and jacket into a tattered paper bag.

Who saw the movie?  What did you think?

How different is the climate of our world now compared to when the movie aired in 2005?

I would love to hear your comments about the story.